Original allocation: June 6, 1988.
After being granted the WYGG calls on February 22, 1991, 88.1 went on the air in June 1993 with an ethnic religious format.
This station also broadcasted, for a time, with an illegal relay, also on 88.1, in the Brooklyn NY area.
Some newspaper articles on WYGG can be seen (here).


Original allocation: October 22, 2007.
89.3 was granted the WSFS calls on September 4, 2009.
Originally owned by an organization called "FM Pregnancy Centers Inc.", the station eventually converted their CP (construction permit) over to Domestic Church Media Foundation (owners of WFJS, 1260 in Trenton).
To match WFJS in Trenton, the 89.3 calls changed to WFJS-FM on November 12, 2010.
WFJS went on the air in May 2011.


WSMR was a short-lived pirate station that only broadcasted for about a week and a half in September of 1998.
It was basically an extension of WCNJ, 89.3 in Hazlet, which at the time had undergone some programming changes.
In the summer of 1998, they were a CHR/Classic Rock hybrid, calling themselves "CFM".
The format was run by Mike Selvanto.
Then, in August, it was announced that Sal Anthony (ex-PD of WCNJ and WRLJ and ex-pirate of 104.7 in Howell) had bought WCNJ and converted it back to what it had been doing before, which was oldies.
I'm assuming that Mike Selvanto and Sal Anthony had some bad blood between them, since Mike decided to set up shop here in Toms River and spin old "CFM" airchecks, which is what WSMR was broadcasting.
During the brief time it was on, WSMR broadcasted in mono (with bad modulation, I might add) from a studio at 117 Rt. 37 E. in Toms River, near Hooper Ave.
I had the pleasure of speaking to Mike on several occasions, and he had plans on making WSMR a live & local operation as well as setting up an additional station on 90.3 FM.
However, once the station went off the air in September, it was never to be heard from again.
I spoke to Mike again in October of 1998 and he still had plans on putting WSMR on the air, but in early December, the studio line for the station was disconnected, and passing by the studio on Rt. 37, I observed that they had moved out and the room was empty. 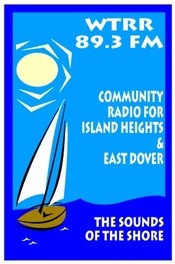 
89.3 signed on in November 1999, under the calls of WKZQ.
89.3 officially became WTRR on March 17, 2000.
The station, which broadcasted on a part-time weekend schedule most of the time, featured a Classic Hits format.
WTRR was also the home of the very popular "Breath & Breath Radio Show."
Breath & Breath (aka Bob Belby & Carl Sartori) were originally on Fairleigh Dickenson University's WFDU in Teaneck NJ back in 1981 and WBSB, a carrier-current station from Bergen Community College in Paramus from 1979 to 1980.
Past programming on WTRR included two shows hosted by Karen Hershey: "Talk Of The Town", a current events call-in show that ran in early to mid-2000 and "Legal Talk", a financial show that ran from the end of 2000 to early 2001.
Other shows included: "The Mighty Sparrow Show" - a musical variety show that showcased the Beatles music, "LiveWire" - a heavy metal show hosted by Cher Savage that ran till the end of 2000, "Frank & Friends" - an adult standards show (with an emphasis on Frank Sinatra) hosted by Ken Ambler which ran through mid-2000 along with a one-shot show in February 2001, "Alan Bay's Ocean Oldies" - an oldies show that ran from December 2000 to January 2002, "The Nancy Dowd Show" - a show focusing on events taking place in Island Heights, and last but not least, London Lou, who hosted a musical variety show on Sunday mornings.
London Lou also doubled as the announcer for all of WTRR's liners and jingles.
Program Director Ted Landry hosted the Friday afternoon, Saturday morning and Sunday morning shifts - with staff meteorologist Jim Anderson handling weather duties.
WTRR, on a summer hiatus since June 23, 2002, returned to the air on September 27, 2002.
In June 2003, WTRR ceased broadcasting.
WTRR briefly resumed broadcasting between March and May 2004.


Original allocation: May 6, 1988.
Original call letters of WQHF were assigned on April 19, 1990, then the WRLJ calls on July 31, 1992.
WRLJ was originally supposed to be a religious station when it hit the air and the calls were to stand for "Rejoice Lord Jesus," however that never came to be.
In November 1996, WRLJ finally hit the air simulcasting the Oldies format from WCNJ, 89.3 in Hazlet.
In January 1997, WRLJ branched out from WCNJ and became a live and local Oldies station as "Oldies 89.7."
However in July 1997, Sal Anthony, who at the time was PD for both WCNJ and WRLJ, decided to branch out on HIS own, stole most of WRLJ's equipment, forcing them off the air, and started a pirate station on 104.7 FM in Howell in August of that year.
He was ultimately busted in September.
Click (here) for the article on the pirate station that appeared on September 5, 1997 in the Asbury Park Press.
Meanwhile, 89.7 was trying to put themselves back together.
On October 24, 1997, the station switched calls to WPDQ and by December, were back on the air, still with the Oldies format, but this time calling themselves "Q-89.7."
Over the next couple of years, the Oldies format slowly evolved into Classic Hits.
The station now had a very loyal following and for the 2001 season, became the flagship station for the Lakewood BlueClaws minor league baseball franchise.
In 2002, a majority of the personalities on WPDQ were dropped and the station pretty much became automated.
In December 2002, it was announced that WPDQ was sold for $875,000 to Bridgelight Corp. (an entity comprising of Calvary Chapel of Old Bridge and Cornerstone Calvary Chapel of Howell).
On January 24, 2003, the sale officially closed, however WPDQ continued on as usual, until the following Friday, January 31, 2003, when they went off the air in anticipation of a format change.
Dave "The Rave" Kapulsky hosted "Relics & Rarities" during a majority of WPDQ's run - pics of Dave in the studio are (here) and (here).
Newspaper articles on WPDQ can be seen (here).
On May 1, 2003, calls changed to WRDR (which were previously used at 104.9 in Egg Harbor City for many years).
On June 27, 2003, 89.7 returned to the air as "The Bridge", with a religious format.
(WPDQ "yellow" logo - from my own personal collection)